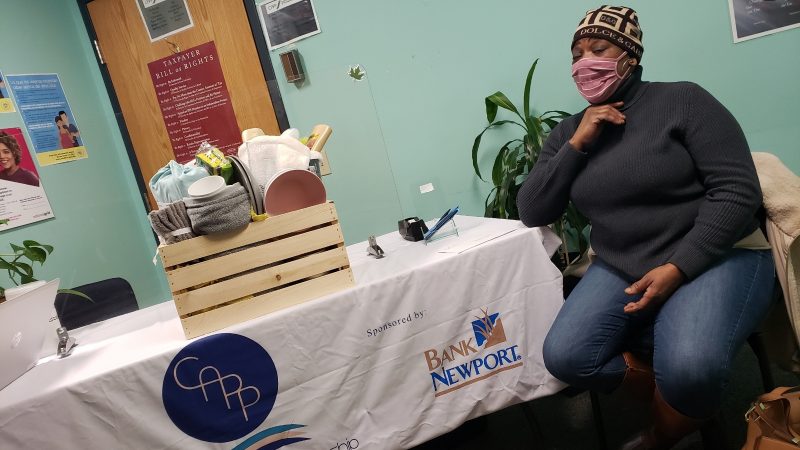 CAPP’s tagline is Leading with Dignity, Serving with Purpose. It says a lot about who we are and what we do. When tragedies happen and families are in need, we make every effort to live up to our ideal.

When the December 22nd fire broke out in the multi-family home on Lucy Street in the Mount Pleasant section of Providence, three families lost everything they owned. One family lost two small children in the blaze. 2020 was already a year where many of Providence’s residents were left unemployed, facing eviction and sick; the fire seemed like a final cruelty of circumstances. The normal channels people turn to for assistance after such an emergency proved insufficient and these residents were left with nothing.

After being alerted to the families’ dire needs through our partnership with the Providence Public School Department, CAPP contacted several of our community partners to rally around these families to offer support in their time of unimaginable loss. Through the quick action of CAPP and its partnerships with local agencies, the families received gift cards for basic needs, food from our food pantry, clothing, PPE as well as mental health referrals. Our sister agency in Cranston provided these families access to their furniture bank so the persons displaced by the fire could modestly furnish their new apartments.

One of these residents, identified as Elizabeth, said “We were not expecting to get so much help.” She and her family have expressed deep gratitude for the kindness they were shown. The family thanked CAPP for our generosity and expressed additional thanks for the connections to other resources not available in-house. Prior to the tragic fire, Elizabeth said she had not heard of CAPP and didn’t know about the services we provide to Providence County's residents. Throughout her life Elizabeth said she had always helped others and never thought she'd need assistance such as what she received from CAPP. She was able to accept our help in the spirit of wanting to pay it forward and plans to give back by volunteering at CAPP in the future.

Elizabeth is close to securing US residency, the process has been delayed due to systemic changes and the ongoing pandemic. She has been in the US for 14 years, and has never received public or private assistance before. She explained that the undocumented population stays to themselves, only trusting organizations to which they have a connection and only utilizing those trusted resources. “Many go without instead of going to get anything," Elizabeth said. The aid she and her family received from CAPP and others left her very grateful “When you lose everything, and don't have anything, even $20 can make a difference.”

Another resident named Freddy was also displaced by the fire. Freddy is heartbroken over the loss of his home and especially over the loss of the children, to whom he was a self-described father figure. Like Elizabeth, he never thought he would need assistance and hadn't heard about CAPP until the fire happened. The most valuable help he received was the moral support. Freddy describes himself as a fighter but everything that happened left him feeling broken. The support he found at CAPP lifted him up. “It was more emotional support than anything. For someone to listen," he said. During impossibly hard times, it was important to him that strangers had been there for him when his extended family was unable to help.

Earlier in 2020, he was working a steady job in another state but his hours were reduced due to the pandemic and it led to him coming to Rhode Island. He was working when the fire happened, coming home to find nothing but the destruction left in its wake. Of the things he lost, he was deeply hurt by the loss of a disk containing irreplaceable photos of his family when his children were small back in his country of origin. He says he is traumatized by the fire and is struggling but getting by thanks to the kindness and compassion he received from CAPP.

A second, unrelated house fire on Smith Street gave us the opportunity to serve another resident who had difficulty accessing resources. Kathy is a part-time life skills specialist at another non-profit agency in Providence. She had received heating assistance through CAPP in the past and had referred friends and neighbors to the agency when they hit hard times. Her apartment was heavily damaged in a fire and most of her belongings that weren’t consumed by the fire were damaged by smoke, soot and water. She was disheartened by the serious lack of services and resources available to her at the most truly trying time of her life. Shelters weren’t able to offer help because of COVID-19 restrictions. She found several programs that were unfunded because monies were redirected towards COVID relief. She found herself staying in a hotel while her name was on multiple waiting lists for housing, but, there was no telling how long it would be before she could be accommodated. “I saw homeless people and felt like I was about to be one,” she said.

Her calls for help were unheard and unanswered.

One call to CAPP was the turning point for this resident. Through the LIHEAP department, she was connected to our Community Outreach Coordinator. This is what Kathy would describe as a turning point in her recovery from the fire. She felt immediately connected and was promptly referred to some of our community partners who were able to offer her the help she desperately needed. After a visit to the CAPP food pantry at our satellite office on Broad Street, she felt like she was “seen as a person.”

With housing as her most prominent concern, Kathy said a CAPP staff member made a call to a housing service with the intention of continuing to get her established in an apartment. Once an available dwelling was available, she received assistance with a security deposit from our Rental and Mortgage Assistance Program. “(Being in this situation) feels like you’re by yourself. Knowing that people care about you makes a difference,” Kathy said.

There are no words to be spoken or act of support that could ever replace the lives lost or to ease the pain suffered by the families of this horrific event at what should have been a time to celebrate the winter holidays. CAPP and our partners in the community were proud to stand by the survivors and hope the assistance and empathy we provided made a difference for these families’ lives. Our staff would like to thank our partners, We Heart Lives, CCAP, and Project Undercover for providing essential services as well as the generous private donors who helped us provide for these residents.

Community Action Partnership of Providence is tireless in the pursuit of making the lives of our residents better. There isn’t a specific program within our agency dedicated to relief for fire survivors but we were proud to have been able to mobilize and provide wraparound services to these residents while they rebuild. Our Executive Director Rilwan Feyisitan, Jr. would like to establish an emergency fund at CAPP to support families and individuals in similar situations. He and members of the board are contributing personally to seed this fund. They invite you to join us in building this fund.